This time two years ago, we were lost, angry, and scared (okay, we were pissed. Really pissed). Republicans had taken the House, Senate, and Presidency. They were planning to go big. And we knew the only move we had was to play defense, focus on our own representatives and senators, and never give an inch. In that moment, we wrote the original Indivisible Guide, beginning with these lines:

Donald Trump is the biggest popular vote loser in history to ever call himself President-Elect. In spite of the fact that he has no mandate, he will attempt to use his congressional majority to reshape America in his own racist, authoritarian, and corrupt image. If progressives are going to stop this, we must stand indivisibly opposed to Trump and the members of Congress who would do his bidding. Together, we have the power to resist — and we have the power to win.

Looking back, we think this holds up pretty well. And the growth of the Indivisible movement, and what it has accomplished has surpassed our wildest expectations.

You didn’t just read the Guide. You didn’t just start groups in your hometowns across the country. You made Congress listen. In 2017, Indivisibles went to town halls, die-ins, and district offices. We defeated TrumpCare, rallied for immigrants, and turned the Republican tax cut for the rich and corporations into an enormous political liability. We stiffened Democratic spines and weakened Republican resolve. We couldn’t stop everything — but we did stop a lot.

The grassroots were responsible for Democrats retaking power.

Taking back the House used to be a pipe dream. It’s easy to forget, but just a little over a year ago, winning back the House was an idea that was too crazy for conventional Washington wisdom (read: pundits). Folks had good reason to believe taking back the House would be impossible. Back in 2010, the Republican Party succeeded in their sinister plot to flip targeted state legislatures and the House, giving their party control over redistricting after the 2010 census. And with that power, they drew gerrymandered districts to ensure a GOP House majority, no matter how unpopular their party became.

But where Republicans built a seawall, you built a bigger blue wave. A week ago, we flipped the House. We flipped 6 state legislatures. And we moved the whole country to the left. 317 out of 435 Congressional districts (73%) were more blue on Tuesday than they were in 2016.

Indivisibles endorsed candidates, knocked doors, registered voters, phonebanked and textbanked. You dragged your friends, family, and neighbors to the polls. Drop by drop, you built the blue wave and remade Congress, state houses, and governor mansions. And as a result, our slate of elected leaders at every level across the country will feature people who look like America, ready to fight for economic and racial justice and beat back the worst of Trump’s attacks on our neighbors, communities, and future.

After two years of defense, we now go on offense.

Now, Democrats have the House of Representatives and a ton more power at the state level. (Thank you for that!) 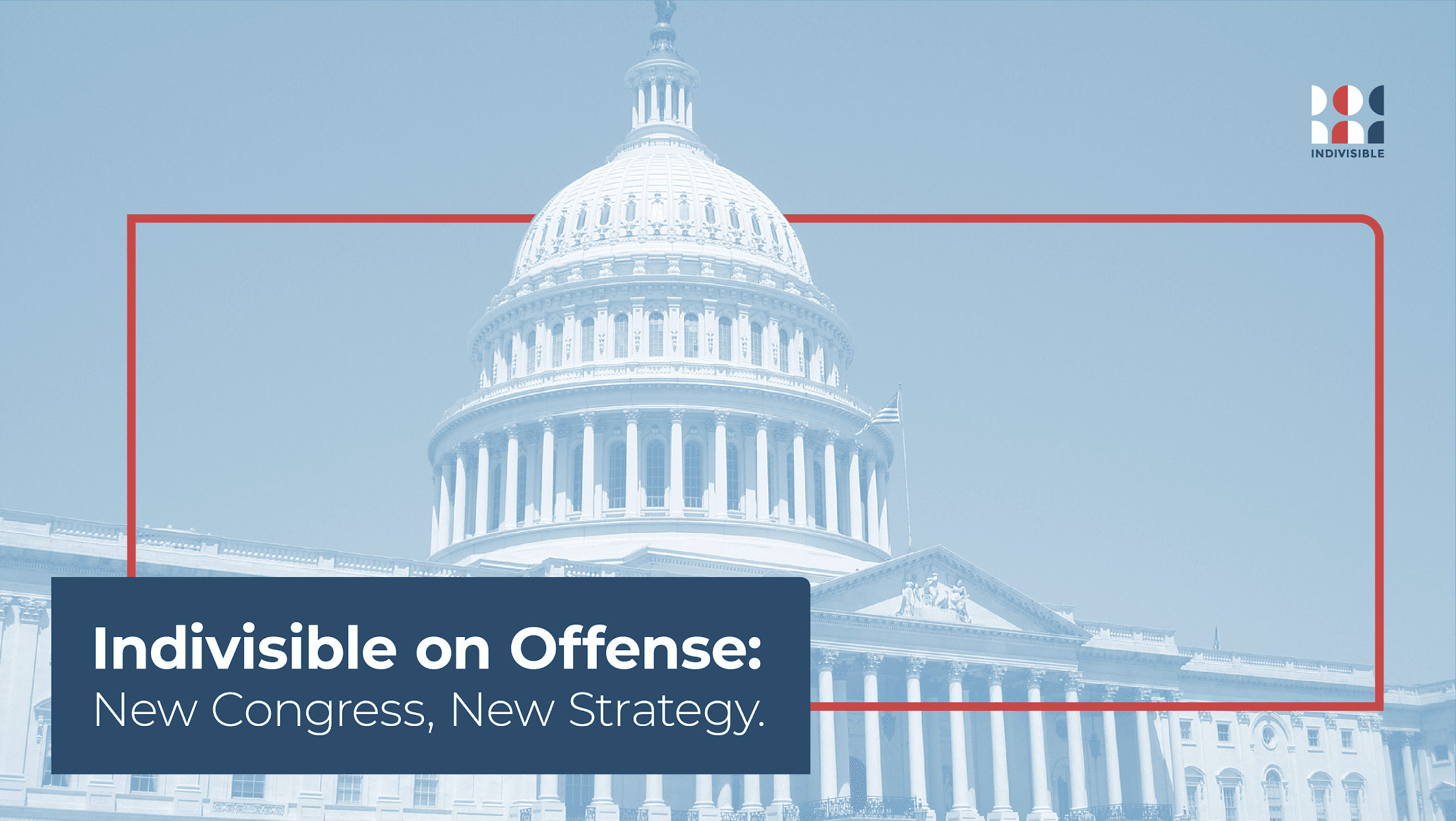 We had a feeling last Tuesday would go well for us. So we’ve been working on a new federal-level guide and state-level guide for months to prepare for this new political reality that we’re calling Indivisible on Offense. We can’t wait for you to dig in. Here’s a quick and dirty summary of how we win over the next two years:

This is the road to stopping Trump in his tracks, locking in the gains we made, and advancing an alternative vision for the country rooted in democracy, inclusion, and respect. This is the road to retaking the White House in two years. But none of this is automatic. We won last Tuesday. Now we have to make those wins mean something going forward.

So here’s what we need you to do to get ready for this fight:

Two years ago, we wrote the Indivisible Guide because we knew that everything we hold dear was under threat. We’ve lost a lot since then, but we — along with critical partners — have accomplished so much. We resisted. We retook power. And with control of the House of Representatives and new power in the states, we will band together, indivisible to remake this country.